Posted by Talha Omer on October 3, 2017 in Probability | 2 comments 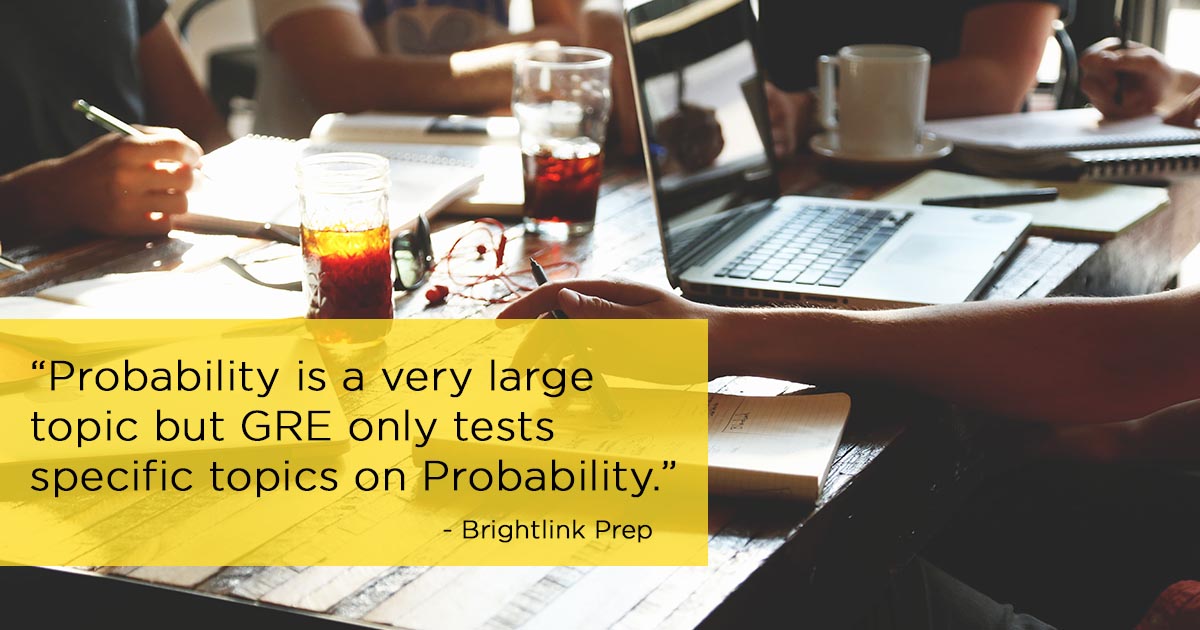 Most of you may not know this but gamblers, who called upon mathematicians to provide optimal winning strategies, lead the early development of probability & combinatorics. Since then, probability theory has expanded beyond gambling. Now it has vast applications in many fields such as politics, business etc. and of course GRE!

Each outcome in a sample space is called an element. Thus, the sample space S, of possible outcomes when a coin is flipped twice, may be written

S = {HH, TT, HT, TH}, where H and T correspond to heads and tails, respectively and HH, TT, HT, TH, each is an element of the sample space.

Consider the experiment of tossing a die. In this case, the sample space is

On the GRE, it is always helpful to list the elements of the sample space systematically by means of a tree diagram. For example, an experiment consists of flipping a coin thrice.

The figure below shows the various paths that give the distinct elements of the sample space. Starting with the top left branch and moving to the right along the first path, we get the sample point HHH, indicating the possibility that heads occur on three successive flips of the coin. Likewise, the sample point TTH indicates the possibility that the coin will show a tail on the first toss, followed by another tail on the second toss and then a head on the third toss. By proceeding along all paths, we see that the sample space is

Example A: Of the 700 members of a certain organization, 120 are lawyers. Two members of the organization will be selected at random. Which of the following is closest to the probability that neither of the members selected will be a lawyer?

Now, we will solve this question later on in our discussion, but for the time being, let's try to list out the sample space. So an experiment, in this case, consists of selecting two members from an organization. Therefore the possible elements of the sample space are LL, LN, NL, and NN, where L and N correspond to lawyers and not a lawyer, respectively.

Another example from the official GRE questions

Example B: A box contains 5 orange disks, 4 red disks, and 1 blue disk. You are to select two disks at random and without replacement from the box. What is the probability that one of the disks selected is blue?

Again, we will solve this question later on in our discussion, but for the time being, let's try to list out the sample space. So an experiment, in this case, consists of selecting two disks. Therefore the possible elements of the sample space are OO, RR, OB, BO, OR, RO, RB, and BR where O, R, and B correspond to orange, red and blue, respectively.

Now both events A and B will occur if the outcome is an element of the subset {6, 12}, which is just the intersection of A and B.

On the GRE, the intersection of two events A and B, is the subset (event) containing common elements to A and B.

Two events A and B are mutually exclusive, or disjoint, if A intersection B = 0, that is if A and B have no elements in common.

The union of the two events A and B, is the event that contains all elements that belong to A or B or both.

On the GRE, events and the corresponding sample space can also be sometimes illustrated graphically through a Venn diagram. In a Venn diagram, the rectangle represents the sample space and the circles represent the events. For example, the Venn diagram below shows different intersection and/or unions of events.

2. Probability of an Event

In many experiments, such as tossing a coin or a die, all the sample points have the same chance of occurring and are assigned equal probabilities. For points outside the sample space, that is, for simple events that cannot possibly occur, we assign a probability of 0.

Furthermore, if A1, A2, A3, ... is a sequence of mutually exclusive events, then

You toss a coin twice. What is the probability that at least 1 head occurs?

Solution 2a: The sample space for this experiment is S = {HH,HT,TH,TT}.

If the coin is unbiased, each of these outcomes is equally likely to occur. Therefore, we assign a probability of w to each sample point. Then 4w = 1, or w = 1/4. If A represents the event of at least 1 head occurring, then

Solution 2f: Let A be the event that a product falls within the error limits. Then

We have a box containing 20 items, of which 5 are defective. If 2 items are selected at random and without replacing the first, what is the probability that both items are defective?

Let's reconsider example 3a as follows: We have a box containing 20 items, of which 5 are defective. If 2 items are selected at random and with replacement, what is the probability that both items are defective?

* This is an exhaustive purview of probability topics, concepts, formulas and rules that are tested on the GRE. You do not need to consult any advanced probability books to prepare for GRE probability. The above article will serve the purpose on GRE probability.

For any confusion or if you need more clarification on any concept/example discussed above, please feel free to leave a question in the comment box below.